Photo Credit Laura McKay Photography
Two weekends ago I had the pleasure of taking a week long vacation with my husband and son to the borough of Brooklyn to attend the wedding of my dear friends Jen Cwiok and Kristen Walsh. I had the esteemed position of cake lady at the wedding, and was proud to stand with so many talented vendors at the proclamation of Jen and Kristen’s love.
I met Jen Cwiok in 1994, in my “Introduction to Women’s Studies” class at UGA. It was love at first sight; Jen was my punk rock hero. She, and her bandmates Lysa and Noel, introduced me to Short Mountain, Food Not Bombs, and anarcha-feminism, a path that would eventually lead me to the Catholic Worker movement, a degree in Social Work, and work in the rape crisis, domestic violence, and community gardening movements- and ultimately, to Asheville. Jen moved to NYC a little while after I left Athens, became a librarian, and has rocked steady for the last 15 years. She has remained an inspiration to me. About five years ago, Jen met (and fell head over heels for) Kristen. Among many other things, Kristen is a Hula Dancer. She performs traditional Polynesian Hula in various venues in NYC, and for the first few years that she and Jen were dating, Jen referred to her simply as “Hula.”
So when Jen announced 9 months ago that she and Hula were getting married, I cleared the deck and made sure that everyone that got hired in the Cake Shop knew that I was going to be gone for a week during peak fall wedding season.
And on Thursday, September 17, we baked five tiers of carrot spice cake in the shop, packed up the layers into plastic bins, and me and my family drove through the night to NYC. (We had the pleasure of the road trip company of Miss Ursula Gullow, of Art Seen Asheville fame. (have you checked out her excellent blog? I suggest that you do.) Ursula got me through the 10pm to 4am driving shift with dreams, schemes, and relationship processing, but that is another story.
Friday and Saturday were filled with getting lost in Brooklyn while Jasper slept in the back of the car, mixing icings in Jen and Kristen’s kitchen, icing cake layers, and doing last-minute tasks for the brides. And then, Saturday afternoon, the magic began. Held at Smack Mellon gallery in Dumbo (DUMBO = Down Under the Manhattan Bridge Overpass), the wedding was GORGEOUS. The ceremony was lovely. I saw friends I hadn’t seen in years.

The park across the street had a playground for Jasper, a river, and a big bridge with trains on it. (what more could a 4-year-old want?)

The food was amazing. The dance party rocked. And the cake went off without a hitch. 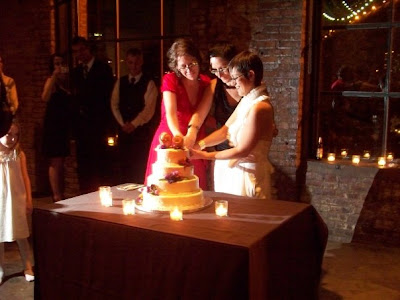 And we mustn’t forget the rockstar wedding cake shot of the evening:

But by far the most touching moment of the whole night was when Kristen, accompanied by two members of her South Pacific Island Dance Group performed a Hula Love Song for Jen. Swoon. Congratulations, Jen and Kristen. And thank you for inspiring me, including me, and being my friends, family, and inspiration!
Much Love,
Jodi
PS: there was a Michael and a Tim!
Michael Frey, on the left, is responsible for the Short Street Cakes logo and practically all of our design work, by the way. Tim, on the right, is responsible for being awesome.